Book of the Month

We've Been Discovering Canada By Bicycle Since 1988

Cycle Canada is a Canadian company owned by Bud Jorgensen and Margot Jorgensen.

During the past four decades Bud has created a number of well known cycling events and has developed new routes that have become recognized as Canadian classics. including the Toronto Bicycle Network's Pelee Wheelie, first held in 1986, and, the TBN's signature event Cyclon, first held in 1987.

During the past four decades, in addition to Tour du Canada and Cycle Canada events, Bud has created a number of well known cycling events and has developed new routes that have become recognized as Canadian classics. This includes the Toronto Bicycle Network's (TBN) Pelee Wheelie, first held in 1986, and, the TBN's signature event Cyclon, first held in 1987. You can read about how Cyclon began here: Cyclon.

Before operating Cycle Canada full time, Bud was a journalist. Most recently he was a columnist at the Financial Post and The Globe and Mail. In earlier years he wrote for Reuters, Canadian Press, Associated Press, Vancouver Sun and Vancouver Province. Bud is Executive Director of Tour du Canada. He is a member of the Randonneurs Ontario. Bud rode Paris-Brest in 1991 and is a Director of CKAP, the Canadian Kilometre Achievers Program. 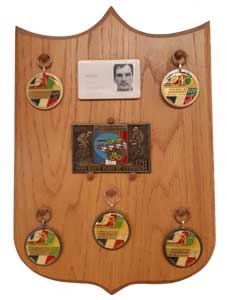 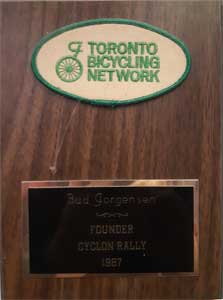 Margot has owned and operated three companies involved in retail, wholesale and office leasing. She served as Chair of the Cheshire Home Foundation, Director of Times Change Women's Employment Services and member of the Economic Development Committee in the town where she lives. Margot operates the Websites for various non-profit organizations including, the Canadian Kilometer Achievers Program CKAP.ca on a volunteer basis.

This photo is of Bud and Margot at the Terry Fox monument in Thunder Bay during Tour du Canada 2019. 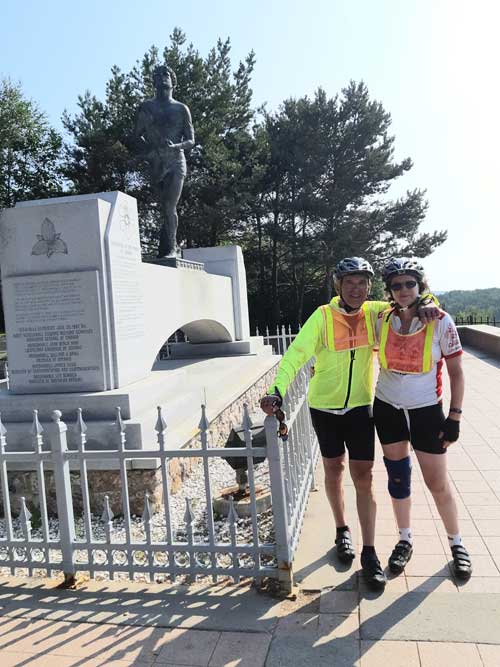 All participants must register individually with Cycle Canada and agree to our policy terms and conditions in order to participate in our tours.

Cycle Canada is selective in its choice of projects to support corporately. We manage the affairs of Tour du Canada, the club. Time and funds that we donate to Tour du Canada and other cycling clubs constitute the significant share of our corporate support activitites. We support the sponsorship policy adopted by the Board of Tour du Canada.

We receive support and friendship from members of local communities across the country, particularly for Tour du Canada. We appreciate this greatly and always strive to conduct ourselves in a similar manner.

Cycle Canada may from time to time sponsor other projects that are consistent with furthering its corporate goals as a commercial tour operator and the operator of Canada's premier cycling website portal.

If you represent a cycling club and want a free text listing on our CycleCanada Directory or you wish to have us host your club's web site for free, please e-mail us at: sweep@cycleCanada.com. We also provide free text listings on our Directory to any bicycle shop in Canada. We operate VeloHospitality.com which promotes cycling friendly services across Canada.

Cycle Canada will organize custom tours where funds are raised for a charitable cause or for a non-profit club. If you are interested in our consulting services please complete our customer tour form: Custom Tours

Cycle Canada is the sponsor of the Tour du Canada Bursary Fund which provides funds to help young people participate in the cross-country bicycle tour — Tour du Canada. We welcome contributors to this fund.