Travel to the Arctic.

For full details on the event please go to the event information page: Tour Arctic

The following are answers to Frequently asked Questions about Tour Arctic and about travelling by bike on roads in wilderness areas of Canada.

On Cycle Canada's other expedition trips, we recommend a touring bike. For those trips and for the paved road segments of Tour Arctic and the Dempster Highway, tire widths of 25 to 32 mm are fine. Tire choice depends on personal preference. A touring bike may do the job but there is a qualification.

The Dempster Highway is unpaved but it is regularly and continually maintained with ongoing grading and maintenance thoughout the year. For this section riders will need tires with a minimum width of 32 mm and tire widths in the range of 35-40 would be better. Choice of tire width depends in part of the weight of the rider. In looking at tire fit on a bike, keep in mind that wider ties likely will have a higher profile, so more clearance will be needed to accommodate mudguards.

On Tour Arctic we camp at three different types of facilities. 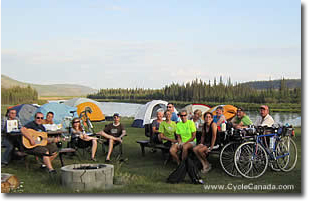 In remote areas, we use campgrounds with limited services — pump water, pit toilets and no electricity. In some remote locations we make special arrangements to have services but they will be limited.

In really remote sections it is wilderness camping with no designated campground, no running or pump water, no toilets and no electricity. Where we have wilderness conditions we'll have portable wilderness toilets and showers. Be prepared, though, to rough it some nights.

We have a van with detachable trailer to support Tour Arctic. The support vehicle carries the galley kitchen, food, participants' gear and other equipment to support the tour.

Cycle Canada staff prepare meals on riding days, this includes a daily hot breakfast and dinners, plus a basic make-your-own lunch in the morning. There will be fruit and snacks available in camp and on the ferry trip.

There is a full tool kit on board. As most bicycles now have components that are unique designs the result is there are few standard parts that fit all bikes. The common issue is a wheel problem, usually a broken spoke, and you should have the tool to remove a cog set if that is necessary to replace a spoke on the rear wheel, cog side. You should carry spare spokes that fit your bike. Please contact us or talk to someone at your local bike shop about what parts you might need.

There is space in the support vehicle to carry participants who are unable to ride due to health or bike issues. However, passenger space is limited.

Tour Arctic ends at Tukytoyaktuk where cyclists can dip a tire or toe in the Arctic Ocean.

The Arctic Circle is 66 degrees, 33 minutes, 39 seconds north latitude. It is the southern boundary of polar day, the period when the sun is visible around the clock during summer. On Tour Arctic and The Dempster Highway, we cross the Arctic Circle.

Inuvik is north of the Arctic Circle and has 56 days of continuous sunlight, beginning in late June. Winter has 30 days without sunlight, starting at the end of the first week of December. The longer summer period is due to a twilight effect when the sun is slightly below the horizon.

Snow is very rare in Whitehorse and Dawson during the high summer period from late June to early August. But it is possible to get snow flurries in summer at the mountain passes and at Inuvik in late August. However, it is unlikely that there would be deep accumulations of snow.

We cross the Continental Divide twice between Prince Rupert and Whitehorse

On The Dempster Highway segment we go through the Ogilvie Mountains (two passes) and Richardson Mountains (one pass). The high elevation point on the trip is 1,289 metres at the summit of North Fork pass in the Ogilvies.

Grizzlies are common in the north and bear sightings from the road are not uncommon. Riders are always advised to wear bright colours. Bears have notoriously bad eyesight but very keen hearing a good sense of smell. When in bear country make it a habit to keep track of wind direction. While riding do not use headphones, which can be a distraction from seeing or hearing things you need to see. 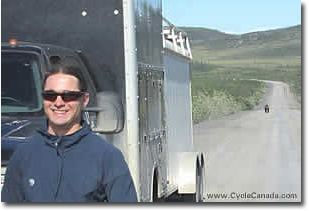 Bears are not the only concern. Small animals, such as squirrels, can trash a bike bag. Never have food, toothpaste, insect repellent or scented cosmetics in your tent. Store those items and your bike bag in a secure place overnight. When riding, carry food in a clean thoroughly sealed plastic bag. Do not feed any wild animals or provide them with an opportunity to take your food products, including food waste. Use the bear-proof garbage containers. Don't throw those banana peels or apple cores into the woods!

Insects are a fact of life during summer in many parts of Canada. Mosquitoes are more of a nuisance in early summer and much less of an issue in later days of summer. High summer in the north is roughly from late June to early August. Bringing bug nets is recommended

The first Tour Arctic ferry trip is a short one from the B.C. mainland to Vancouver Island, it is integrated into the day's ride.

There is one major ferry trip, a full day on an ocean-going vessel with full services.

The final two ferry rides are river crossings on The Dempster Highway. They are part of the roadway system and integrated into the days' rides.

Registered participants in Tour Arctic and The Dempster Highway will receive registration packages with much more detail on planning, training, packing and preparing for their tour.

Travelling to the Start Point and Travelling Home

If you are flying in for the start of Tour Arctic, major airlines service Vancouver. From Vancouver Airport to our Orientation location and first night stay there are taxis at the airport that will transport bikes. There is also train and bus service from eastern Canada and the U.S.

At the end of the ride several airlines service Inuvik. There is no scheduled overland service such as bus or train leaving from Inuvik.